An Open Letter To Yellow Cab 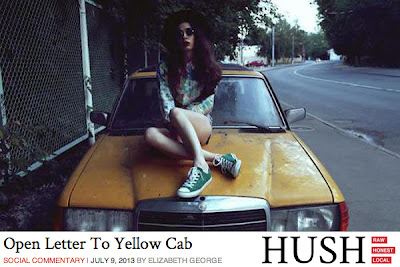 I've left a message with your head office and submitted an online comment, but I believe the only way I'll really be heard is by expressing my complaint publicly. 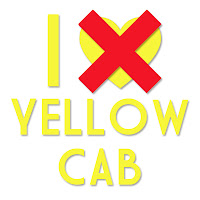 My complaint stems from last night.

- Around 3:45am, I was looking to catch a cab back to my apartment (approx. 10 minute drive from where I was).

- I went outside and waited for a cab to drive by, but when there were none, I called Yellow Cab and they sent one over.

- As soon as I got in, I announced that I will be paying by credit card, and he told me he isn't taking credit. In fact, when I asked if it was just his cab, he said that no cab companies are taking credit. He suggested I make a lengthy detour to get out money from a bank machine, which is not a viable option. I won't be paying for that inconvenience.

- I decided to hop out, told him I'll find another cab. I had to walk a couple of blocks (I'm a 24 year old woman at 3:45am on Hastings street...) and found another Yellow Cab!

- I thought I'd take my chances and waved it down. He picked me up and as soon as I got in I said that I will be paying by credit card. I added that I would tip well (because most of your drivers need to hear this to even consider offering decent service), and this time he said 'sure no problem'. That means the initial Yellow Cab driver had simply refused to offer that method of payment.

- I couldn't believe it. I let him know that it cannot possibly be a waste of time when the meter is still running, because the service is still being offered and he is still getting paid.  And then I reiterated that he IS offering a service and he should remember that.

I have worked in the service industry before, some nights aren't your nights, but when you are on the clock, and you are heckling your customers for an 'easier' method of payment, just to offer the minimum service required, it's ridiculous. He drove me to my destination and I paid the fare (approx. $6 and I still tipped $3 despite my anger).

Rarely you offer excellent service with cab drivers knowing all the 'short cuts' in town, they know where they are going by simply saying the name of the restaurant or address, and can provide service with a smile and keep a light atmosphere in the car.

I always do my part - call to book a cab, wait outside, prompt them that I'm paying by credit card, tell them the address, and put on my seatbelt.

The majority of the time, your drivers are just awful. They are short with us, they huff and puff about taking credit, they don't plan a route, and take the longest possible way to the destination. They tailgate closely to other cars, cut them off, don't obey street lights, slam on the their breaks etc.  I have personally been rear ended by a Yellow Cab, twice.

I seriously suggest you try to turn your service around.  I don't need to be treated that way at the end of my night, or on my way to work, or heading to the airport. I'm paying for a service, not to be made to feel like an inconvenience.

After sharing my most recent experience with my friends, it's hard to come by one person who is satisfied by the service you're offering. Just because you dominate the industry in Vancouver, doesn't mean dominate their hearts.